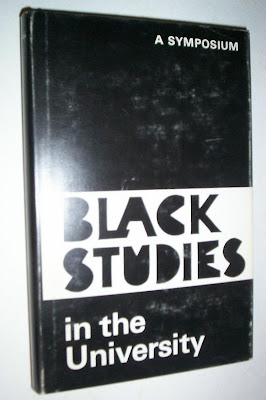 Black studies in the university; a symposium.

Hardcover. Book Condition: Very good.An edited record of the proceedings of a 1968 symposium at Yale discussing the establishment of a black studies curriculum.

In an audacious indictment of American academia’s hypocrisy and racism, a twenty-two-year-old Black undergraduate student at Yale in the late 1960s early evinced the intellectual prowess for which he would become renowned. He wrote, “To be black here—to be aware of all the things whiteness has meant for black people and to be asked to submit passively to being coddled by the white power structure, being paid to come, is a fundamental contradiction for anyone with a positive black identification.” The young man was Armstead Robinson and he was one of eighteen African-American men at Yale when he enrolled in the fall of 1964.

Robinson soon founded the Black Student Alliance at Yale and helped develop the university’s Black Studies program. In 1968 he helped organize a symposium entitled, “Black Studies in the University,” one of the first such symposia in the country. It was attended by representatives of forty colleges and universities.

In William Banks’ Black Intellectuals (1996), Armstead is listed among a pantheon of 130 distinguished African-American minds of the nineteenth and twentieth centuries including W. E. B. Du Bois, Toni Morrison and Cornel West. One of America’s most prolific Black scholars, Henry Louis Gates Jr., characterized his Yale classmate as one of “the talented tenth of the Talented Tenth, the la creme de la creme brulee … the most brilliant scholar of our set.” Another prominent historian, Eugene Genovese (author, most famously, of Roll, Jordan, Roll: The World The Slaves Made), early recognized Armstead’s destiny as a historian and wholeheartedly recommended him for a faculty position. Genovese described him as “an astonishingly impressive young man ... on his way to a career of high distinction ... everyone who has had any contact with him shares my high regard for him.”


Contemporary Black Studies programs owe a large, and largely forgotten, debt to radical social and political movements that resulted in student protest demonstrations across the country at both majority white institutions such as Columbia University, and historically black institutions such as Howard University.

During the decade of the 1960s black students demanded education that was relevant to their specific history of racial oppression.

These demands were a central component of larger, and at times radically utopian, political and philosophical imperatives that undergirded the Black Power Movement.

The proponents of the Black Studies movement of the 1960s and 1970s argued that educational institutions in American society (with an emphasis on, but not exclusive to, the university) had to be radically transformed for humanity's sake. Historically, Black Studies advocates supported the utilization of scholarship for the larger pursuit of social justice and a broader, more inclusive democracy.

However, the "modern Black Studies Movement" represented perhaps the greatest political and pedagogical opportunity to fundamentally alter power relations in American society. Building on the early-twentieth-century "Negro History Movement" pioneered by historians Carter G. Woodson and J. A. Rogers, the modern Black Studies Movement emerged from the hotbed of black radicalism that emerged during the 1960s. Black Studies provided a practical and political education for a variety of captive and captivated audiences during this era. The movement simultaneously promoted community building, black nationalist cons...