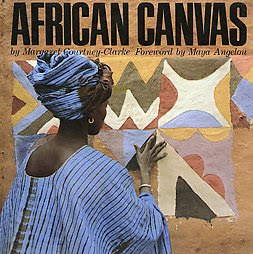 "Photojournalist Courtney-Clarke, whose book Ndebele captured the painted wall art of South Africa, brings the same inquiring spirit to this depiction of her three-year trek from Nigeria to Senegal. Surviving sandstorms, locusts and malaria, she documents the bold geometric and symbolic wall paintings made by women in remote West African villages. These women transform objects from their daily world--a fish net, a cooking pot, a weaving, a calabash--into rippling patterns laden with cosmic significance. Made with natural pigments from plants or clay, these pictures often perish in the rainy season. Creeping urbanization is also taking its toll on the villages, whose mud compounds, houses, clothing, body painting and pottery Courtney-Clarke documents as well. This strong, moving photoessay is equally valuable as an investigation of a dwindling way of life and as a permanent record of a seldom-seen vernacular art form."

"This book is by no means a scholarly treatise but rather a beautiful pictorial survey of many of the traditions of architectural decoration created by women in various regions of West Africa. Courtney-Clarke, a journalist-photographer who previously wrote the similar Ndebele: The Art of an African Tribe , provides an introduction consisting of commentary on the problems of locating and photographing the murals and their artists, as well as a brief discussion preceding each group of photos. As a record of an ephemeral art that is being abandoned in many areas, this book is strongly recommended for public and academic libraries."

The most striking feature of AFRICAN CANVAS is the close up detail and large pictures of exterior and interior West African mud house design. Some pottery design is also featured. Colors are mostly earth toned because natural pigments are used. A close-up and personal look at this beautiful art form, and a good resource for folks interested in ethnology and in African design.